One of the big disconnects over the past year has been the divergence between the price of paper gold and the seemingly inexhaustible demand for physical gold, from China all the way to the US mint. Today we get a hint on how this divergence has been maintained: it now appears the main culprit is the massive boost in supply by gold mints around the world working literally 24/7, desperate to provide enough supply to meet demand at depressed prices in order to avoid a surge in price as bottlenecked supply finally catches up with unprecedented physical demand.

Bloomberg reports that “global mints are manufacturing as fast as they can after a 28 percent drop in gold prices last year, the biggest slump since 1981, attracted buyers of physical metal. The demand gains helped bullion rally for five straight weeks, the longest streak since September 2012. That won’t be enough to stem the metal’s slump according to Morgan Stanley, while Goldman Sachs Group predicts bullion will “grind lower” over 2014.” Odd – one could make the precisely opposite conclusion – once mints run out of raw product, the supply will slow dramatically forcing prices much higher and finally letting true demand manifest itself in the clearing price.

“The long-term physical buyers see these price drops as opportunities to accumulate more assets,” said Michael Haynes, the chief executive officer of American Precious Metals Exchange, an online bullion dealer. “We have witnessed some top selling days in the past few weeks.”

The propaganda is well-known: “Prices are likely to drop further as global economic conditions are stabilizing and tapering worries continue,” said Rob Haworth, a senior investment strategist in Seattle at U.S. Bank Wealth Management, which oversees about $110 billion of assets. “There is no doubt that physical demand has improved, but it will not be enough to support prices.” Uhm, yeah. That makes no sense: what happens when global mints are hit by capacity bottlenecks from gold miners for whom it is becoming increasingly more economic to just halt production at sub-cost levels.

Meanwhile, here is a case study of how individual mints are working overtime to plug the unprecedented demand comes from Austria:

Austria’s mint is running 24 hours a day as global mints from the U.S. to Australia report climbing demand for gold coins even while Goldman Sachs Group Inc. says this year’s price rebound will end.

Austria’s Muenze Oesterreich AG mint hired extra employees and added a third eight-hour shift to the day in a bid to keep up with demand. Purchases of bullion coins at Australia’s Perth Mint rose 20 percent this year through Jan. 20 from a year earlier. Sales by the U.S. Mint are set for the best month since April, when the metal plunged into a bear market.

It’s not just Austria. Presenting the US Mint:

The U.S. Mint, the world’s largest, sold 89,500 ounces so far this month. The Austrian mint that makes Philharmonic coins, saw sales jump 36 percent last year and expects “good business” for the next couple of months, Andrea Lang, the marketing and sales director of Austria’s Muenze Oesterreich AG, said in an e-mail.

“The market is very busy,” Lang said. “We can’t meet the demand, even if we work overtime.”

The price for the Austrian mint’s 1-ounce Philharmonic gold coin slumped 27 percent last year, according to data from the Certified Coin Exchange.

“It’s been a very bad year for gold,” said Frank McGhee, the head dealer at Integrated Brokerage Services LLC in Chicago. “People who bought coins have lost value, but they are not looking at short-term gains, and hope springs eternal.”

Tell that to China.

That said, keep an eye on GLD ETF holdings – for now the biggest marginal setter of gold price remains the paper ETF, whose “physical” gold holdings have cratered in the past year. Once this resumes going higher, buy. 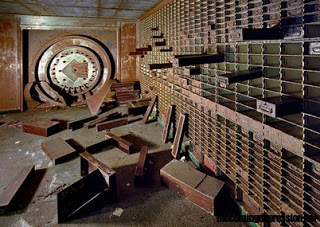 Allegation that Central Banks Have Rehypothecated, Leased or Outright Sold the Gold They Claim to Have Is Gaining Momentum

We noted in 2012 that there are serious questions as to whether the Fed and other central banks really have the gold holdings which they claim.

This story is starting to go mainstream.

A year ago the Bundesbank announced that it intended to repatriate 700 tons of Germany’s gold from Paris and New York. Although a couple of jumbo jets could have managed the transatlantic removal, it made security sense to ship the load in smaller consignments. Just how small, and over how long, has only just become apparent.

Last month Jens Weidmann, Bundesbank president, admitted that just 37 tons had arrived in Frankfurt. The original timescale, to complete the transfer by 2020, was leisurely enough, but at this rate it would take 20 years for a simple operation. Well, perhaps not so simple. While he awaits delivery, Herr Weidmann is welcome to come and look through the bars in the Federal Reserve’s vaults, but the question is: whose bars are they?

In the “armchair farmer” fraud you are told: “Look, this is your pig, in the sty.” It works until everyone wants physical delivery of their pig, which is why Buba’s move last year caused such a stir. After all nobody knows whether there are really 260m ounces of gold in Fort Knox, because the US government won’t let auditors inside.

The delivery problem for the Fed is a different breed of pig. The gold market is far more than exchanging paper money for precious metal. Indeed the metal seems something of a sideshow. In June last year the average volume of gold cleared in London hit 29m ounces per day. The world’s mines are producing 90m ounces per year. The traded volume was many times the cleared volume.

The paper gold in the London Bullion Market takes the familiar forms that bankers have turned into profit machines: futures, options, leveraged trades, collateralised obligations, ETFs . . . a storm of exotic instruments, each of which is carefully logged, cross-checked and audited.

Or perhaps not. High-flying traders find such backroom work tedious, and prefer to let some drone do it, just as they did with those money-market instruments that fuelled the banking crisis. The drones will have full control of the paper trail, won’t they? There’s surely no chance that the Fed’s little delivery difficulty has anything to do with the cat’s-cradle of pledges based on the gold in its vaults?

John Hathaway suspects there is. He worries about all the paper (and pixels) linked to gold. He runs the Tocqueville gold fund (the clue is in the name) and doesn’t share the near-universal gloom of London’s gold analysts, who a year ago forecast an average $1700 for 2013. It is currently $1,260.

As has been remarked here before, forecasting the price is for mugs and bugs. But one day the ties that bind this pixelated gold may break, with potentially catastrophic results. So if you fancy gold at today’s depressed price, learn from Buba and demand delivery.

And last week, Glenn Beck – hate him or love him, he’s got the 594th most popular website in the world and many viewers on Dish network and various cable providers – did an entire 20-minute episode on the issue:

This story hasn’t yet made it to the New York Times, the Washington Post or network television … but it is gaining momentum.