Olduvai – where the environment, economy, and energy problems come together…

See OLDUVAI for information on my novel.

It is a fictional tale that examines the various problems humans are encountering: rising police states; environmental degradation; economic uncertainty; and, surviving in a world of unexpected social fallout due to the ‘perfect storm’ of unintended consequences from our ‘exponential growth culture’.

I ended my last post with the following paragraph:
“I often believe we are ‘pushing in the wrong direction’ as Donella Meadows laments in Thinking in Systems: A Primer: “…a clear leverage point:  growth. Not only population growth, but economic growth. Growth has costs as well as benefits and we typically don’t count the costs—among which are poverty and hunger, environmental destruction and so on—the whole list of problems we are trying to solve with growth! What is needed is much slower growth, very different kinds of growth and in some cases no growth or negative growth. The world leaders are correctly fixated on growth as the answer to all problems, but they’re pushing with all their might in the wrong direction,…leverage points are frequently not intuitive. Or if they are, we too often use them backward, systematically worsening whatever problems we are trying to solve” (emphasis added).”

And, I had to add this Gary Larson cartoon that epitomises this predicament: 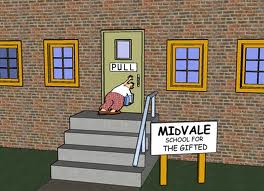 While it may not be ‘politically correct’ to criticize two of our most fundamental ‘entitlements’ (healthcare and education), I’m going to suggest an alternate perspective on them. Today, education, my current profession/career (I am a vice principal in an elementary public school) will be viewed.

If you have read my novel, Olduvai, you will know that I question the current curriculum. Here is a passage, during which one of the protagonists is presenting to a group of student teachers:
“I believe there is a perfect storm brewing, which could see a global, social transformation unlike any seen before on the planet. This change will likely hit full speed within the next decade or two, possibly sooner. The shift will be caused by two of our civilisation’s most fundamental systems: our monetary and energy systems.
“These two complex systems have coalesced and created an impact on a third system, our environment. These systems are three very large fronts being blown together by gale force winds and will be the perfect storm in the not too distant future.”
Sam noted that more of the students were beginning to show signs of increased interest, leaning forward and nodding now and again to certain points. He continued, gaining more confidence as time passed.
“If this storm is indeed on the horizon, then you as educators need to consider how best to prepare our future citizens. Will the future resemble the so-called knowledge economy the current system assumes? What if our current monetary system fails because of all the debt we’ve accumulated? What if the energy we rely so heavily upon begins contracting as predicted? What knowledge and skills will be most important in one of these alternate scenarios?” He paused to take another drink and check his time….(pp. 37-38).

You will note that it is the curriculum that I am questioning. Our current system is heavily engaged and committed to 21st century skills that, in general terms, focus on technology and related skills/knowledge. I have heard many pundits argue that if we are to solve the problems of today, we need better technology and more skilled/knowledgeable scientists, engineers, etc.. They follow the herd in this belief without viewing the situation more critically and questioning how our current system has led us to these predicaments. One could argue, for example, that it was the scientific/mechanical realisation of how steam energy could help to further our access to energy resources (coal and then petroleum) that allowed us to get where we are and ushered in all the ‘unintended consequences’ that go along with our journey (e.g. pollution, poverty, resource depletion, etc.); fast forward a century and we are now dealing with nuclear power and the deadly ‘fallout’ when ‘accidents’ occur (it’s important to note here that the crisis at Fukushima continues to grow).

I believe, however, that this is indeed the wrong path; that we are ‘pushing in the wrong direction.’ Not only are we exacerbating the resource depletion and environmental issues (think of all the energy and resources used to get a computer/tablet/smartphone from conception to customer, and the waste products from this production, that, ultimately, include the item itself), but our students will be ill-prepared for life outside of the current ‘paradigm’; a paradigm that may be on its last legs. A future of contracting energy is significantly different than one that is defined by growing energy resources. These different assumptions have huge implications for the education system’s curriculum.

Students in today’s schools learn little about gardening and farming, for example; however, history and prehistory show that societies that lack citizens capable of feeding themselves suffer tremendously during sociocultural transformations. People that rely on a complex system of trade (e.g.  ‘just-in-time’ delivery to avoid large inventories) to feed themselves could easily be looking as mass starvation during any significant upheaval.

When you step back and look at the education system from a different perspective, one that foretells of possible energy contraction and economic collapse, one can only conclude that we are leading our children on a path that suddenly ends with no preparation for what that entails; we are pushing upon them many skills/knowledge that could be quite useless in a post-carbon society, especially if the shift from our current world has been ‘apocolyptic’.