EROEI: Economics Without the Money

EROEI: Economics Without the Money.

“For some years now,” Tim Morgan writes in Life After Growth, “global average EROEIs have been falling, as energy resources have become both smaller and more difficult (meaning energy-costly) to extract.”

Consequently, falling EROEIs have become the basis of a variety of dire forecasts…

Be skeptical of anything that seeks to analyze our economy by taking money out.

In these scenarios, we spend more and more energy just getting energy, and we have less and less for other discretionary items. As Morgan writes, “If EROEI falls materially, our consumerist way of life is over.”

I’m writing to you today to slay this flawed EROEI concept.

I have to say I used to be taken in by this argument. I wrote an issue of my Capital & Crisis newsletter a couple of years back with the headline “Crack This Code: EROEI — Why It Matters Now and What to Do About It.” I included a list of approximate EROEI ratios for various energy sources:

I noted that such ratios were falling and concluded that a lower mix of EROEI sources means higher prices for many commodities, because “it will take more energy to produce them.”

It means nothing of the kind.

I would like to right my old error and convince you why EROEI is fatally flawed, so you don’t fall for it. I’ll use Morgan as the foil, because he is an articulate and strong proponent of the idea in his new book.

Morgan’s crucial assumption appears on page 5: “The economy is not primarily a matter of money at all. Rather, our economic system is fundamentally a function of surplus energy.”

This is the key to the whole EROEI argument. Morgan repeats it often. And it is completely wrong.

You can’t take money out of the equation! Money is what it’s all about. It is the essence of the economic life. It’s at the center of decision making. As economist Hyman Minsky said, “Money isn’t everything. It is the only thing.”

Be skeptical of anything that seeks to analyze our economy by taking money out. Households and firms make decisions based on money. They certainly don’t use EROEI, nor should they.

According to Morgan’s logic, you wouldn’t bother generating electricity…

Here is Robin Mills, currently with Manaar Energy (and once a petroleum manager for the Emirates national oil company in Dubai):

“Generating electricity, usually at a thermal conversion efficiency of less than 50% plus transmission losses, has an EROEI of much less than 1, but is still rational and economic because electricity is such a useful form of energy.”

Put another way, the money costs of the inputs are less than the money prices of the outputs. It works because… it’s profitable! People value electricity more than they value the inputs. Looked at through an EROEI lens, though, it doesn’t make sense.

You can build any scary resource scenario you want if you exclude money prices. If, say, falling ore grades were predictive of prices, then we would see continually rising prices for copper and other resources. Clearly, this isn’t the case. But this does not prevent people (usually geologists) from taking these moneyless concepts to make economic forecasts of higher prices.

A general rule of thumb: If it doesn’t take into account money prices, then it isn’t about the real-world economy as it exists today.

That’s my biggest objection to EROEI. But I’m not making a comprehensive case against EROEI here. That would take too long. I won’t get into how EROEI is calculated: there is no agreement and when you think about it, maybe it’s impossible to know with any accuracy worth relying on.

In the end, I think Morgan doesn’t really get modern money. He repeats an old myth about its origins. He doesn’t seem to know why fiat currency has value. (He says money is a “claim on real goods and services,” which only begs the question: Why do people accept dollars in exchange for real goods?) He doesn’t seem to understand the primacy of making a monetary profit in a market economy.

Contrary to Morgan, you can’t take money out and hope to understand the modern economy. You have to study money. And in markets, you have to make a money surplus (a profit) — or you are out of the game before long. I can’t say the same is true for EROEI, which is perhaps the best I can say against it.

You can ignore EROEI, but you can’t ignore money.

Chris Mayer
for The Daily Reckoning

Ponzi World (Over 3 Billion NOT Served): The End of the Status Quo: aka. Mass Consumption

Ponzi World (Over 3 Billion NOT Served): The End of the Status Quo: aka. Mass Consumption.

The End of the Status Quo: aka. Mass Consumption

What Comes Next Will Obliterate Globalization
The days of borrowing from Third World wage slaves to enrich billionaires are coming to an end…
The stock market casino is merely a circus side show. The real action, similar to 2008 is in the credit markets. That’s where billionaires stash their trillions flowing from the ongoing East/West industrial arbitrage aka. globalization.
Since 2008 global debt has grown by $33 trillion, meaning it was uninterrupted. There was barely a hiccup in the status quo debt accumulation after the malfeasance of the global credit crisis.
Current global debt/GDP stands at 350%
The status quo is merely supported by ongoing debt accumulation and hence the confidence of investors. Total debt now stands at ~$200 trillion globally, most of which is wholly unsecured debt backed by nothing.
http://www.mckinsey.com/insights/global_capital_markets/uneven_progress_on_the_path_to_growth 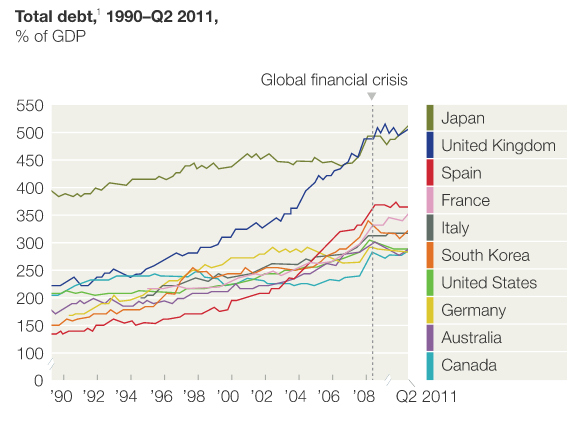 Japan: Locus of the Next Crisis?
The epicenter of the coming meltdown could well be Japan where on a GDP-adjusted basis, debt monetization is occurring on a pace far greater than the U.S. or Europe. All of that hot money goes somewhere, and the most likely destinations are the surrounding Asian nations having bond yields above those of Japan. A weak yen – the byproduct of Abenomics is driving the carry trades and also fuelling global risk appetite.
Dollar/Yen (red) (inverted) with S&P 500 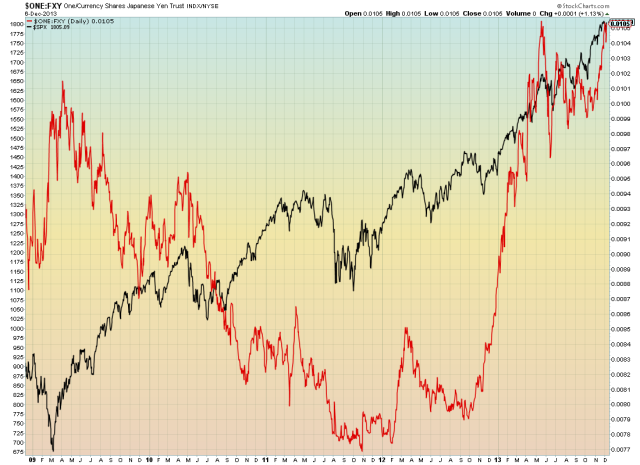 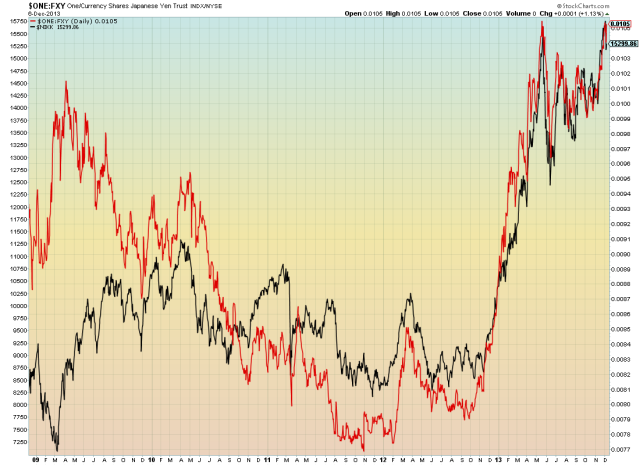 Municipal Bonds Locus of Risk in U.S. Credit
Here in the U.S., municipal bonds are likely to be the epicenter of the coming credit crisis: 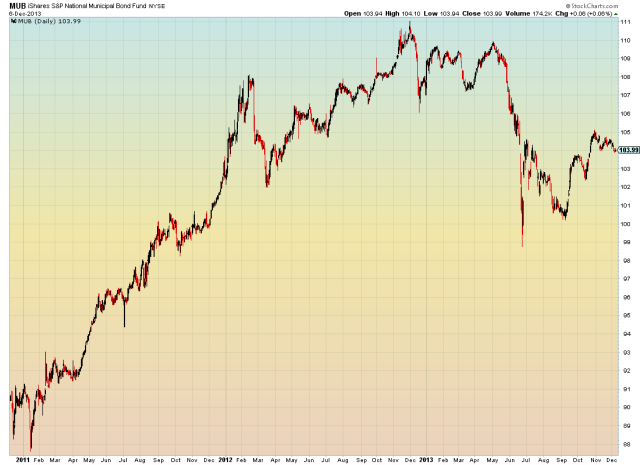 Liquidity, Solvency, and the Unavoidable Minsky Moment
The past five year rally in global credit was driven by liquidity flows and carry trades. Zero percent interest rates subsidized highly leveraged lending to the riskiest of sovereign borrowers. As long as the liquidity flows continued, the underlying solvency was never put into question. When liquidity flows inevitably reverse due to risk aversion, pricing of debt/credit/bonds will be based solely upon ongoing solvency of the underlying borrower. At that point in time, the Minksy Moment will arrive seemingly out of nowhere.

History’s Largest Circle Jerk
Third World wage slaves produce the goods. Over-leveraged Western consumers borrow from the wage slaves (via recurring trade deficits) to buy the goods, billionaires capture the arbitrage profits between rich and poor which they then lend to sovereign governments to service non-amortizing debts. Central Banks provide 0% liquidity to paper over the latent insolvency. All while policy-makers and the dunces at large pretend that this can go on indefinitely.

Borrowed Time and Money
The bottom line is that the status quo is running on the fumes of borrowed time and money. The collapse will be sudden and extremely violent and will bring about an end to the fakest era in human history.

The Brief, Tragic Reign of Consumerism—and the birth of a happy alternative

The Brief, Tragic Reign of Consumerism—and the birth of a happy alternative.