Aside from the totally asinine and impossible strategy of attempting to borrow the global economy out of a debt crisis, we currently face a staggering array of risks unprecedented in modern history. Fortunately, the Idiocracy is fat and happy, comforted by the abiding assumption that printing money is the secret to effortless wealth…

MAXIMUM RISK
Just last week, Tom DeMark confirmed that the 1929 analog is still in play.
The Log Periodic Bubble formation called for a top by mid-January, which is exactly when the current top occurred in the S&P 500 (even earlier in the Dow – see below).
The maximum reading in the Greedometer, confirms the log periodic wave formation.
And then there are all of the other risk factors simmering in the background (NYSE margin at record high, carry trades unwinding, Fed tapering, bullish sentiment @26 year high, lack of hedging, IPO speculation, earnings valuation, sector correlation, low volume, HFT glitches) etc. etc.
The Week In Review: Still Buying the Dip with Both Hands
Once the HFT bots figured out that Friday’s weak employment report may mean a slowing of Fed tapering, they ramped the futures, driving massive short-covering and the obligatory sell-off in Japanese Yen.
Still, for the week, the markets were just barely positive and by no means recovered overall losses for the past two weeks. Bulls have expended a huge amount of firepower to basically get them back at the same level they were at last Friday. It took a mere 8 trading days to wipe out 3 and half months of upside gains, as volume doubled on the down days.
Dow Casino:
The Dow hit its 200 DMA (red line) for only the second time in a year. It’s currently still well below the 50 DMA (blue line)

Russell 2000
The R2K small cap index was the leading market index since 2009. It is now dramatically underperforming and the past week’s rally barely made a dent. 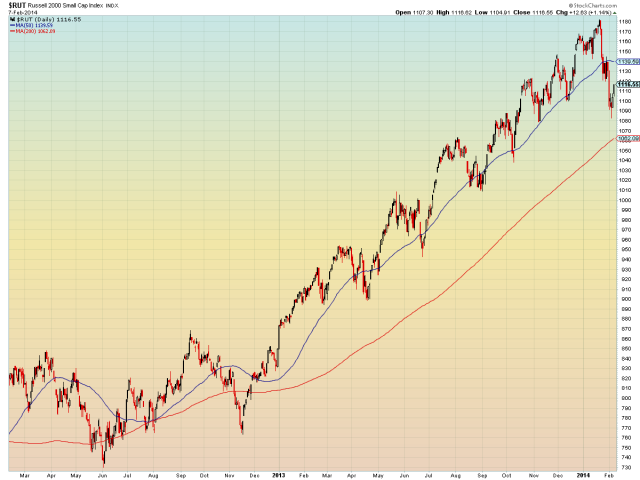 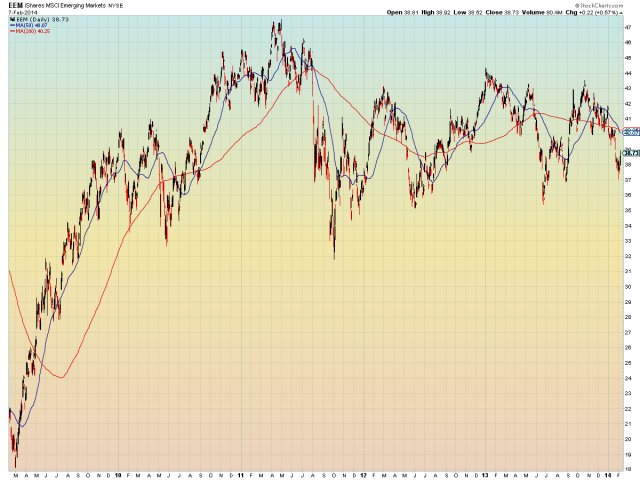 The Fadebook Indicator: 100 P/E stock trading @ the whim of teenage girls
Facebook is still leading the market. Unbelievable
These are early days for this market “sell-off”:

Full Casino In the Casino
Go All In @WYNN
Walmart can’t meet estimates, but casinos are rocking…

Much Ado About Nothing
Here is some perspective for those getting all lathered up about this rally. The Nasdaq is still over a thousand points below where it was @Y2K. Unbelieveable. 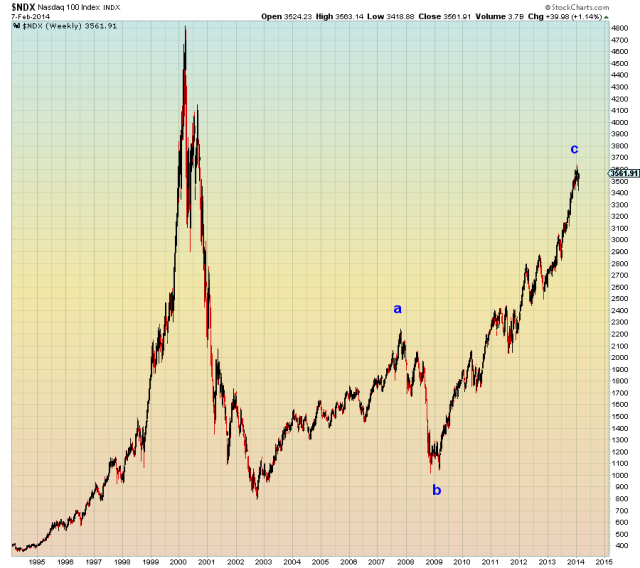 BitCasino
Not This Again !

Lurching Towards the Minsky Moment
Of course, the stock market is merely a side show – a barometer of social mood and risk appetite. The real money is in the bond (credit) markets. As the various speculative excesses unwind during this collapse, one by one we will find out who has been taking the fullest advantage of 0% interest rates and printed money. Like dominoes falling, it will start in one region and spread like an epidemic. Asset “re-pricing” will reveal underlying insolvency that has been papered over solely by asset price levitation.
The Elliot Straight Down Wave (ESDW)
Broadening Top: http://en.wikipedia.org/wiki/Broadening_top
– “In the broadening top formation five minor reversals are followed by a substantial decline.”
– “most of the selling is completed in the early stage by big players and the participation is from general public in the later stage.”
– “It is a difficult formation to trade in” [No shit, thanks for sharing]
Of course we can only be certain that it’s a broadening top, if the market pierces the floor which is below 666 SPX (i.e. the Lehman Low)…

By https://olduvai.ca in Collapse, Economic, U.S./Mexico on February 12, 2014.
← There Is “No Evidence” We Encouraged Forex Manipulation, Bank of England Says | Zero Hedge Fukushima’s Legacy: Understanding the Difference Between Nuclear Radiation & Contamination | Peak Prosperity →