China’s nuclear missile drill seen as warning to US not to meddle in region | South China Morning Post.

Photos published by the PLA Daily show for the first time members of the Second Artillery Forces launching a Dongfeng-31 missile. Photo: SCMP

The People’s Liberation Army has for the first time released photos of its most advanced intercontinental ballistic missile (ICBM) in action – a move seen as a response to US military moves in the region.

The 17 photos published on the PLA Daily’s website on Tuesday provided the first glimpse of a live drill involving the Dongfeng-31 since its delivery to the Second Artillery Corps in 2006. 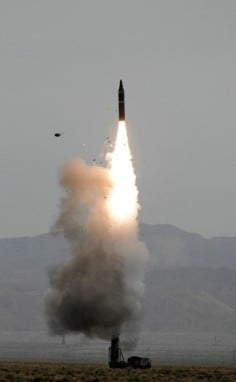 Photos published by the PLA Daily show for the first time members of the Second Artillery Forces launching a Dongfeng-31 missile. Photo: SCMPThe missile has an estimated range of nearly 10,000 kilometres – enough to deliver a nuclear warhead to the capitals of Europe or the west coast of the United States. Military experts said the release was a warning to the US not to interfere in the country’s territorial disputes with Japan over the Diaoyu Islands, or Senkakus, in the East China Sea.

“The disclosure of the Dongfeng-31 at this time obviously aims to respond to the United States’ two big military moves in Japan, which make Beijing believe it is going to meddle in the territorial disputes between China and Japan,” Wong said.

Several of the photos published by the PLA Daily were also posted on the newspaper’s official Sina Weibo account. It was unclear when the drill took place; the captions said sometime this winter.

The pictures showed a missile fired from a large launcher mounted on a 16-wheeled truck. Operators were shown inside a military camp dressed in protective suits, suggesting that the missile force was simulating the launch of an armed warhead.

The caption cast the exercise as defensive preparation, saying the soldiers were simulating how to disrupt an enemy’s missile attack. The pictures show the launcher was erected on the truck and ready for firing.

Hong Kong-based defence analyst Ma Ding-sheng said the pictures indicated that the PLA was more confident about showing off its military hardware after decades of secret development.

“The PLA realises that it needs to increase its transparency, which would also provide them more opportunities to show off their military muscle, as well as quiet questions from the US and other Western countries,” Ma said, adding the missiles had so far appeared to help deter threats.

“I doubt whether the missile is capable of hitting the US, although they claim it has a range up to 10,000 kilometers,” Ma said. “All its live-launch drills have happened inside Chinese territory, within 5,000 kilometers. And we never see the PLA shooting missiles to the Western Pacific.”

Non-operational versions of the Dongfeng-31 and the more advanced Dongfeng-31A were displayed publicly on October 1, 1999, the 50th anniversary of the People’s Republic of China. The Donfeng-31 is the country’s second generation of ICBM, replacing the earlier Dongfeng-4. It was formally delivered to the strategic missile defence force in 2006.

The Pentagon said at the time that the weapon was built using US missile and warhead secrets obtained through espionage and illegal transfers of technology.

This article appeared in the South China Morning Post print edition as Nuclear missile drill seen as warning to U.S. not to meddle

By https://olduvai.ca in Asia, Geopolitical, U.S./Mexico on January 22, 2014.
← Peter Schiff Destroys The “Deflation Is An Ogre” Myth | Zero Hedge USAID Support for Destabilization of Russia →