Home » Collapse » My Home is a Dystopia | Collapse of Industrial Civilization

My Home is a Dystopia | Collapse of Industrial Civilization

My Home is a Dystopia | Collapse of Industrial Civilization. 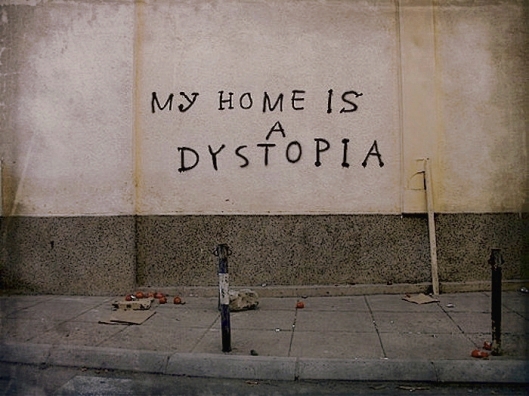 As media spin and political rhetoric of the corporatocracy diverge further and further from reality, modern society appears more and more to have been lifted from the pages of dystopian fiction. While the majority of the population succumbs to a serial-bubble economy, a disintegrating social safety net, and extreme weather, The elite are wasting scarce resources in an effort to hold together the cracking and buckling foundation of our sprawling industrial civilization. It’s in the short-term interest of the elite to construct a police state that will protect the gamed system they have created for themselves even though we know such short-sightedness sets us all up for a more spectacular fall. Capitalism has enslaved the world to the lifelong pursuit of little bits of paper and metal in order to buy the mass-produced products and food that have become essential to the survival of billions of people. Money and the illusion of material wealth are now perceived as more important than preserving the habitability of the planet. We live in a pathological dystopia of money worship. 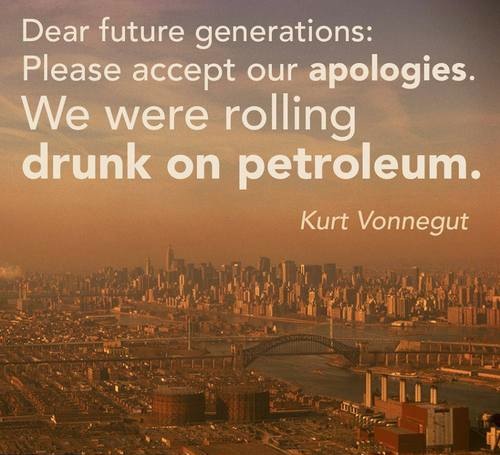 Punch-drunk on fossil fuels, humans have been more destructive than a bull in a china shop; the true cost of fossil fuels continues to be externalized and downplayed as ever-more ecological debt racks up, revealing itself in anincreasingly destabilized biosphere and collapsing web of life. Sadly, the ‘climate emergency‘ has become yet another excuse for the elite to accelerate their looting by treating CO2 emissions as one more capitalist market tool — tax/trading policies as well as the costly and impractical capture and storage of carbon. In the end, any such market schemes will fail due primarily to the harsh consequences of human ecological overshoot and the complexity trap modern civilization has created for itself.

“…Societies struggling with the dilemmas of complexity are vulnerable from two directions. First, systems that are too tightly coupled or too efficient are fragile; they lack resilience. Thus they risk being toppled by a cascade of failure. That is how region-wide electrical outages propagate. The failure of one sector brings down another and another until the grid itself fails, and once down it takes a heroic effort to get it up and running again.

Second, they are exposed to simultaneous failure. When formerly separate problems coalesce into a problematique, a nexus of interlocking problems, the society does not face one or two discrete challenges, as in simpler times, but instead a swarm of simultaneous challenges that can overwhelm its capacity to respond, thereby provoking a general collapse.

Take climate change as a current example. To address this overall problem will require us to surmount a host of challenges in many different sectors (e.g., agriculture, forestry, public health, energy production, infrastructure and so on) not only in one country or economy but in every country—to varying degrees…” 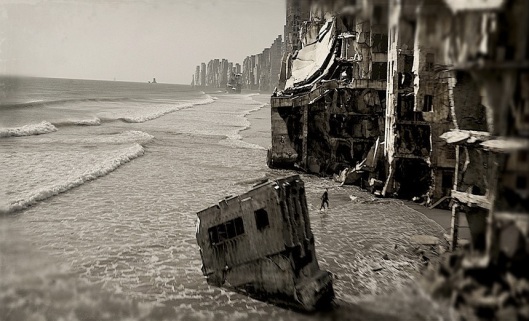 In the geological blink of an eye — 20, 40, 60, or 80 years from now, ghostly ruins will be all that remains of the most technologically advanced civilization that once spanned the globe. I don’t believe there will appear any sort of Hail Mary invention to solve the gauntlet of problems facing mankind — peak fossil fuels, climate change, ocean acidification, keystone species extinction, water scarcity, peak antibiotics, chemical pollution, nuclear proliferation, overpopulation, capitalism, and the complexity trap. Just a few weeks ago, a drill was conducted between Canada, the U.S., and Mexico in order to simulate a large-scale electric grid failure:

“…The vulnerability of our power grid due to solar flares or electromagnetic pulse (EMP) is getting new attention. Our system of interconnected power generation, transmission facilities, and distribution facilities are more vulnerable to cyber attacks than ever before. It would cost $3.6 trillion to fix everything, and would not be completed until 2020.

…It is estimated that a long-term failure of the power grid would likely be so catastrophic to society that casualties would be in excess of 60% of the population, according to the Chairman of the EMP Commission. With the grid vulnerable to solar flares, cyber attacks, EMP’s and weather related events it is important that we have supplies in stock to reduce the waiting time for overseas shipments and manufacturing delays. Currently we lack the inventory.

When, not if, the power grid fails, not only will the citizens of the U.S.A. be at risk of interrupted supplies of water, fresh food, fuel and the shut down of communications, but our very own military will suffer the same affects. Civil unrest would inevitably overwhelm the police department’s ability to respond…”

Back in August of this year, Outgoing DHS Director, Janet Napolitano said the following:

“A massive and “serious” cyber attack on the U.S. homeland is coming, and a natural disaster, the likes of which the nation has never seen is also likely and on its way.”

Of course the extreme weather events of climate change are also a factor in the fragility of the power grid. And ironically, converting to ‘green energy’ to supply power to the grid could compound the problem:

…”Energy officials worry a lot these days about the stability of the massive patchwork of wires, substations and algorithms that keeps electricity flowing. They rattle off several scenarios that could lead to a collapse of the power grid — a well-executed cyberattack, a freak storm, sabotage.

But as states, led by California, race to bring more wind, solar and geothermal power online, those and other forms of alternative energy have become a new source of anxiety. The problem is that renewable energy adds unprecedented levels of stress to a grid designed for the previous century.

Green energy is the least predictable kind. Nobody can say for certain when the wind will blow or the sun will shine. A field of solar panels might be cranking out huge amounts of energy one minute and a tiny amount the next if a thick cloud arrives. In many cases, renewable resources exist where transmission lines don’t.

“The grid was not built for renewables,” said Trieu Mai, senior analyst at the National Renewable Energy Laboratory.

The frailty imperils lofty goals for greenhouse gas reductions.Concerned state and federal officials are spending billions of dollars in ratepayer and taxpayer money in an effort to hasten the technological breakthroughs needed for the grid to keep up with the demands of clean energy”…

The electric grid truly is the Achilles heel of industrial civilization:

…”Outside of the electricity industry, few fully understand the centrality of the grid to life in America today. The most graphic realizations occur when the grid goes down. It’s not just a matter of light and comfort in our homes. Without electricity, citizens may have no access to potable water, sewage treatment, safe food, fuel supplies, traffic control, or health care…

…Not only is the electrical grid central to modern life, but the grid also has multiple vulnerabilities that make keeping it safe a very difficult task. Weather outages are common, although some, such as an ice storm, can do enormous damage. A January 1998 ice storm destroyed much of Hydro-Québec’s massive 765-kV transmission system, blacking out more than 3 million Canadians, causing 30 fatalities, and leaving many customers in the dark for weeks. Tropical storms, such as 2005’s Hurricane Katrina, can also cause long-term and widespread destruction.

Human error can also take down the grid in a hurry, as was the case with the massive August 2003 blackout that turned off power for 55 million people in the Northeast, Midwest, and Canada…

…The 2003 blackout also highlighted another chilling aspect of grid failure: the propensity of the system to suffer from a cascading failure. Because of the grid’s interconnectedness, grid failures can spread quickly, concatenating across the system. This same effect occurred during the 1965 blackout that slammed most of the eastern U.S., an event that began with a simple hardware failure in Canada.”…

And lastly, without electricity for an extended period, we would have hundreds of Fukushima nuclear disasters unfolding all over the planet:

…”Unfortunately, the world’s nuclear power plants, as they are currently designed, are critically dependent upon maintaining connection to a functioning electrical grid, for all but relatively short periods of electrical blackouts, in order to keep their reactor cores continuously cooled so as to avoid catastrophic reactor core meltdowns and fires in storage ponds for spent fuel rods….

What do extended grid blackouts have to do with potential nuclear catastrophes? Nuclear power plants are designed to disconnect automatically from the grid in the event of a local power failure or major grid anomaly; once disconnected, they begin the process of shutting down the reactor’s core. In the event of the loss of coolant flow to an active nuclear reactor’s core, the reactor will start to melt down and fail catastrophically within a matter of a few hours, at most. In an extreme GMD [geomagnetic disturbance], nearly every reactor in the world could be affected…

If an extreme GMD were to cause widespread grid collapse (which it most certainly will), in as little as one or two hours after each nuclear reactor facility’s backup generators either fail to start, or run out of fuel, the reactor cores will start to melt down. After a few days without electricity to run the cooling system pumps, the water bath covering the spent fuel rods stored in “spent-fuel ponds” will boil away, allowing the stored fuel rods to melt down and burn [2]. Since the Nuclear Regulatory Commission (NRC) currently mandates that only one week’s supply of backup generator fuel needs to be stored at each reactor site, it is likely that, after we witness the spectacular nighttime celestial light show from the next extreme GMD, we will have about one week in which to prepare ourselves for Armageddon.”…

The Energy Skeptic reports that Russia is on a crusade to spread these ticking time bombs all around the world. 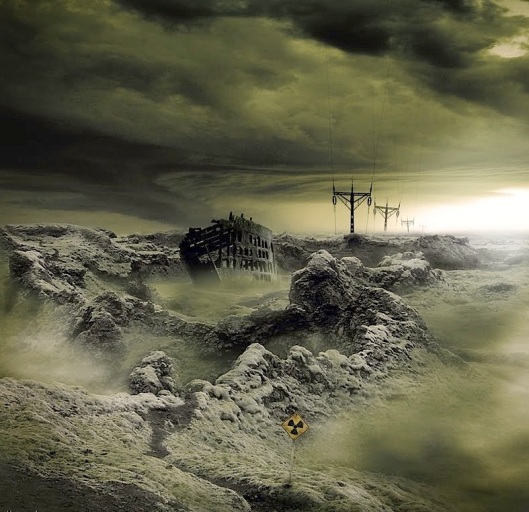 By https://olduvai.ca in Collapse, Economic, Energy on December 7, 2013.
← NSA considered spying on Canadians without this country’s consent, top-secret directive says | National Post How Big Food Creates an Illusion of Choice at the Supermarket | EcoWatch →